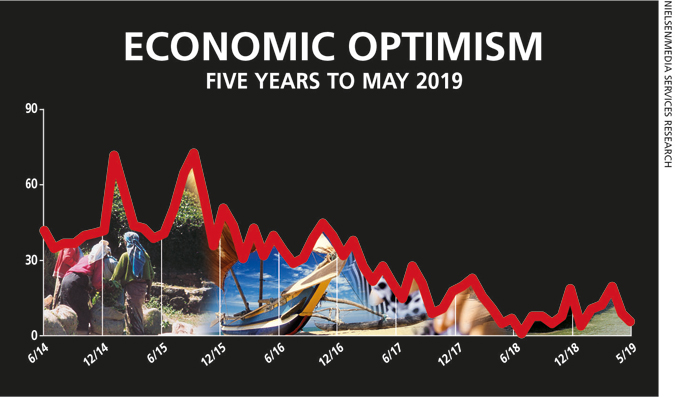 According to the latest monthly LMD-Nielsen Business Confidence index (BCI) survey more than two-thirds of respondents consulted by Nielsen, for LMD’s publisher Media Services, anticipates that the economy will worsen over the next 12 months.

This sentiment is driven by slow or no investment and in the light of the impact of the mayhem since 21 April on tourism, which is one of the largest sources of foreign exchange.

“The economy and the investment climate are obviously in a very poor state due to current developments in the country,” States a survey respondent.

Similarly, another businessperson noted that “given the current economic situation and now with the country’s reputation also at risk, I don’t think there will be any improvement in the coming months.”

The outlook for business has also dimmed with 50% and 67% expecting sales volumes to decline in the long and short terms respectively. In keeping with this view, a member of a business community remarks that “business along with the economy is going to get worse because of the failure of the government in ruling the country properly.”

To this end, a survey respond asks: “With the current situation, how can we expect foreign investments when there is no national security and there’s high uncertainty about the economy?”

This view is corroborated by a fellow business person who notes that “the investment climate in the country is poor due to the prevailing situation. Even last year, there were issues due to the two parties in the (coalition) government”.