Remember the darkest day in cricket history, the 2009 attacks? 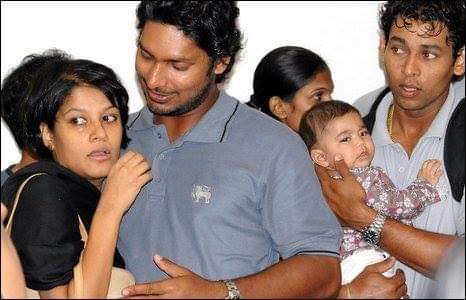 Here's what Sangakkara said after it. Thought I'd share this with those who haven't read it.

"Not thirty seconds had passed when we heard what sounded like fire crackers going off.

Suddenly a shout came from the front: "Get down they are shooting at the bus." The reaction was immediate. Everyone dived for cover and took shelter on the aisle or

behind the seats. With very Little space, we

were all lying on top of each other.

Then the bullets started to hit. It was like rain on a tin roof. The bus was at a standstill, an easy target for the gunmen. As bullets started bursting through the bus all we could do was stay still and quiet, hoping and praying to avoid death or injury. Suddenly Mahela, who sits at the back of the bus, shouts saying he thinks he has been hit in the shin. I am lying next to Tilan. He groans in pain as a bullet hits him in the back of his thigh.

As I turn my head to look at him I feel

something whizz past my ear and a bullet

thuds into the side of the seat, the exact spot

where my head had been a few seconds earlier. I feel something hit my shoulder and it goes numb. I know I had been hit, but I was

just relieved and praying I was not going to

be hit in the head. Tharanga Paranvithana, on his debut tour, is also next to me. He stands up, bullets flying all around him, shouting "I have been hit" as he holds his blood-soaked chest. He collapsed onto his seat, apparently

out first ball, run out the next innings and

now you have been shot. What a terrible first

tour." It is strange how clear your thinking is.

I did not see my life flash by. There was no

insane panic. There was absolute clarity and

awareness of what was happening at that moment. I hear the bus roar in to life and start

to move. Dilshan is screaming at the driver:

"Drive…Drive". We speed up, swerve and are

finally inside the safety of the stadium.

There is a rush to get off the bus. Tharanga

Paranawithana stands up. He is still bleeding

and has a bullet lodged lightly in his sternum,

the body of the bus tempering its velocity enough to be stopped by the bone. Tilan is helped off the bus. In the dressing room there is a mixture of emotions: anger, relief, joy. Players and coaching staff are being examined by paramedics. Tilan and Paranavithana are taken by

ambulance to the hospital.

We all sit in the dressing room and talk. Talk about what happened. Within minutes there is laughter and the jokes have started to flow. We have for the first time been a target of

violence. We had survived. We all realized that what some of our fellow Sri Lankans experienced every day for nearly 30 years.

There was a new respect and awe for their courage and selflessness. It is notable how quickly we got over that attack on us.

Although we were physically injured, mentally we held strong. A few hours after the attack we were airlifted to the Lahore Air Force Base. Ajantha Mendis, his head swathed in bandages after multiple shrapnel

wounds, suggests a game of Poker. Tilan has been brought back, sedated but fully conscious, to be with us and we make jokes at him and he smiles back. We were shot at, grenades were thrown at us, we were injured and yet we were not cowed. We were not down and out. "We are SriLankan," we thought to ourselves, "and we are tough and we will get through hardship and we will overcome

because our spirit is strong." This is what the

world saw in our interviews immediately after the attack: we were calm, collected, and

rational. Our emotions held true to our role as

stopped at a checkpoint. A soldier politely inquired as to my health after the attack. I said I was fine and added that what they as soldiers experience every day we only experienced for a few minutes, but managed to grab all the news headlines. That soldier

looked me in the eye and replied: "It is OK if I

die because it is my job and I am ready for it.

But you are a hero and if

you were to die it would be a great loss for

I was taken aback. How can this man value

his life less than mine? His sincerity was

overwhelming. I felt humbled. This is the passion that cricket and cricketers evoke in

This is the love that I strive every-day of my career to be worthy of."