CO2 emissions are on track to take us beyond 1.5 degrees of global warming 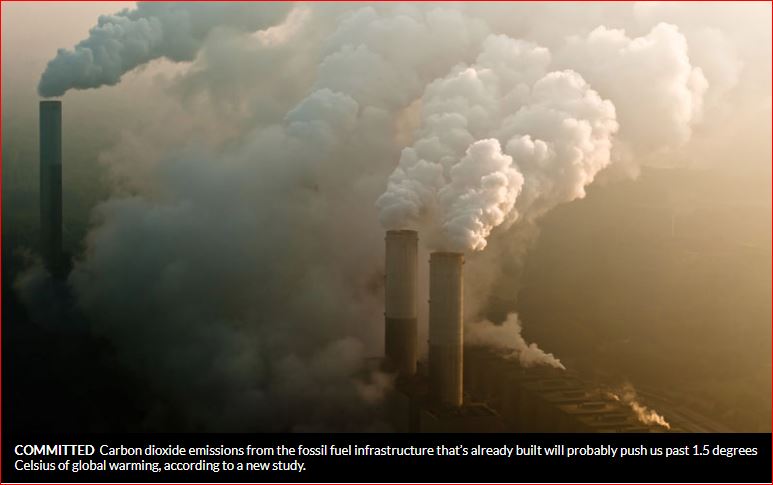 A new study shows just how hard it may be to limit global warming to 1.5 degrees Celsius over preindustrial times.

The world’s existing power plants, industrial equipment, vehicles and other CO₂-emitters are on track to pump out enough carbon dioxide to blow past that target by midcentury, researchers report July 1 in Nature.  Add in future power plants that are already planned, permitted or under construction, and we could emit enough by 2033 to raise average global atmospheric temperatures by 1.5 degrees, the researchers say.

If we want to limit warming to 1.5 degrees, then “we cannot invest more in fossil fuel power or infrastructure,” says Thorsten Mauritsen, a physical climate scientist at Stockholm University who was not involved with the work. “Everything we do from now has to change direction and not use fossil fuels.”

In the 2015 Paris Agreement on climate change, nearly all the world’s nations agreed to try to reduce greenhouse gas emissions enough to limit warming to “well below” 2 degrees by 2100 (SN: 1/9/16, p. 6). The United States has said it would pull out of the agreement (SN Online: 6/1/17), though the exit wouldn’t be complete until 2020.

Still, calls have increased since 2015 for the more ambitious goal of keeping warming to 1.5 degrees. That would mean fewer heat waves, spells of extreme weather and species extinctions (10/27/18, p.7).

Human activity has already increased global temperatures by 1 degree. Emitting an additional 420 to 580 gigatons of CO2 could warm the planet to 1.5 degrees above preindustrial levels, the Intergovernmental Panel on Climate Change estimated in 2018. Current infrastructure could emit that much CO2 between 2018 and as early as 2035, though it could take until 2046 to reach those totals, the new study found.

Existing infrastructure, over its expected lifetime, would emit about 658 gigatons of CO2, says Steven Davis, an earth systems scientist at the University of California, Irvine, and his colleagues. About 41 percent of those emissions would come from China, 9 percent from the United States and 7 percent from the European Union.

Those expected global emissions rise to about 850 gigatons when proposed power plants are included. That’s enough to hit the 1.5 degree budget by 2033, and makes up roughly two-thirds of the 1,170 to 1,500 gigatons of CO2 to reach 2 degrees of warming.

“This analysis … lends some concrete context to what a 1.5 degree target would mean,” Davis says. “These targets that get bandied about are very ambitious” and will require more than a few solar power projects and incremental emissions reductions, he says.

Nearly 10 years ago, Davis and some colleagues performed a census of CO2–emitting infrastructure. The new study updates that census to include all known CO2 sources at the end of 2018, including power plants and industrial emitters, such as cement kilns, as well as transportation sources such as airplanes and vehicles. The update also accounts for shifts in greenhouse gas emissions caused by things such as the U.S. natural gas boom and China’s burgeoning economy. The resulting calculation is how much CO2 is “committed” to be created, unless policy or technology triggers change. The calculations don’t consider current and future efforts to mitigate emissions, for example by expanding renewable energy sources. Nor do the results account for projected emissions increases in developing economies.

This work also doesn’t consider other sectors, for instance agriculture, which contributes methane, a potent greenhouse gas, says Joeri Rogelj, a climate scientist at Imperial College London in England who was not involved with the work. Still, he says, the results should serve as a wake-up call.

“This should not be seen as a fatalistic prediction of what will happen,” Roelj says. But it’s a “strong call to ensure that we make choices that reduce the carbon impact of what is currently in the pipeline.”